The Home of English Football 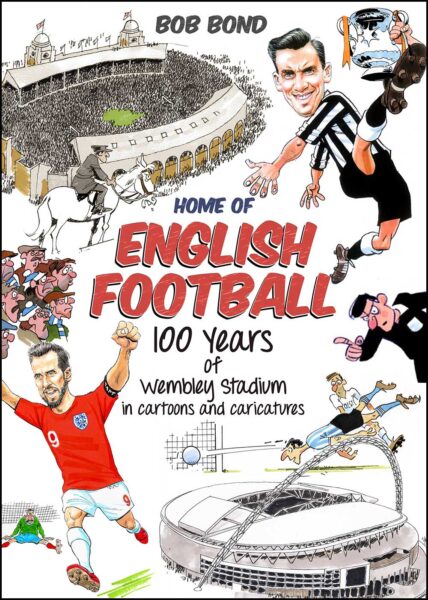 Two words that make the heart beat faster, and bring back to the players and the fans good memories as well as bitter disappointments. Even when you were standing – yes, standing – in the driving wind and rain on a November afternoon, watching a meaningless England game, it was still a magical place to be.

This book will bring back some of those memories of what some people now call the ‘good old days’.

This book is about football only, with caricature illustrations, rambling reports and, above all, the match cartoons.

The match cartoon was a whole new ball game.

Well, the same ball game really, but a different way of looking at it. The cartoon would appear in Monday’s edition of a newspaper, next to the written report of the game. This book is in no way comprehensive. It is simply a selection of the hundreds of football matches to have been played at Wembley. A lot of great games have been missed out, and one or two of little importance are included.

Most of the cartoons were originally drawn in monochrome. Only later have they been enhanced with colour. That doesn’t make them any funnier. Some of the later ones were drawn at the time of the event. The earlier ones, of course, have been done in ‘retro’. Some of the captions and comments may appear more than once.

Most cartoonists can’t recall what they drew ten days ago, let alone ten years. Also this is not a book of statistics, although you might find the odd one here or there.